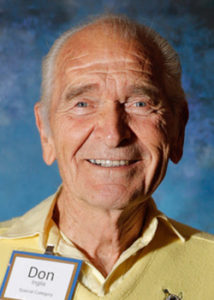 Don Inglis film “career” started in the fall of 1979 with the purchase of a video camera so that he could preserve his son’s games as a member of the Indians football team. Napa’s then-head coach, Les Franco took notice and asked to borrow the tape. Currently in his 40th season, Inglis has never looked back. Throughout the years, Inglis has only missed a total of 10 games, due to hip replacement surgery.

From the top of the press box of the new Memorial Stadium and “in the booth” of the old stadium, Inglis has filmed Napa High’s home and away games in their entirety. Performing his filming duties as a volunteer, his dedication and commitment to the Napa High program made him an obvious choice for the Hall of Fame.

“Grading, studying and analyzing game video is very important as it relates to evaluating player personnel, schemes and techniques,” said former Napa High head coach Troy Mott. “You use the film to really break down your own team. And then you’re able to make corrections and/or adjustments through the film,” said Mott. “Having film to analyze your own team and to really understand how well or how poor you’re kind of putting things together, it’s of the utmost importance.”

Inglis is from Napa and graduated from NHS in 1960. His three sons, Donald, Michael, and Curtis, each played football for the Indians, with their years spanning from 1979 to 1987.

He retired from Pacific Telephone as a building specialist and continues to film Indian football games.